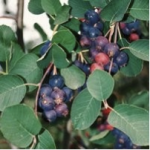 The Saskatoon berry, also known as the Serviceberry, Juneberry, and Shadbush, is a wild plant native to Western Canada. Saskatoon berries grow in Canada from the Great Plains to the British Columbia coast. The berries are especially well known and productive in the BC Southern Interior and the Alberta foothills. The name Saskatoon originates […] 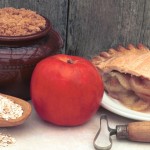 Gravenstein apples were likely brought to Nova Scotia by Charles Prescott around 1800. At his estate, Acacia Grove, he developed extensive gardens and took a keen interest in horticulture. He brought in many fruit trees or scions from other countries to see if they would grow well in the Nova Scotian climate and the Gravenstein […] 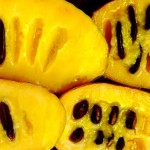 The Northern Carolinian Pawpaw (Asimina triloba) is a fruit weighing 200 – 500 grams and growing 9-15 centimeters in length. It has a rounded cylindrical shape and leathery greenish skin that turns to yellow then black when ripe. The flesh of the fruit is sweet, aromatic and custard-like, and surrounds hard, dark brown seeds. The […] 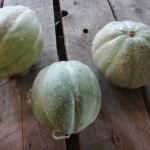 The Montreal Melon’s roots have been traced to varieties brought to Canada by French settlers in the 17th century. During its heyday in the early 20th century it was known as the Queen of Melons, prized for its unique sweet and spicy flavour with tones of nutmeg. The Montreal Melon is extremely large in size […] 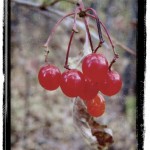 The Highbush Cranberry (Viburnum trilobum) has had a role in numerous food cultures in Canada, and so is also known variously as kalyna (Ukrainian),pembina (French Canadian) and ni-pimina-na (Cree). It is native to Canada, and more specifically the area around Edmonton, in Alberta, in fact, even giving this area the nickname “Kalyna Country.” The plant itself grows about 4 metres […]